Have you ever heard the expression, “It seemed like a good idea at the time” ?  Well, let me tell you. 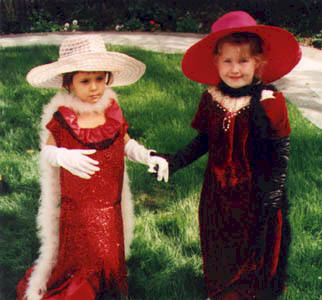 It seems as though little girls love to play “Dress Up” . That is a game where young girls go to their mother’s,  sister’s or grandmother’s closet and pull out all manner of dresses, pants, underwear high-heeled shoes, hosiery, jewelry and hats. They can spend an entire afternoon trying on different clothes, woefully long dresses that are many sizes too big in every dimension,  and shoes that could only be stepped into and not worn on those tiny feet.

Topped with ridiculous feathered hats these young maidens strut around, to the best of their ability, on shaky legs in spike heels thinking for all the world that they look just like their mothers or some other lady of the house or glamorous movie star.

Now what’s a small boy to do when his loving older sister, Carolyn, his guide, counselor and mentor, a frequent trusted co-conspirator and  always faithful companion, decides to play “dress-up”. This unsuspecting lad, too young to understand the trouble he would get into, agreed to go along for the ride.

What started out to be an innocent game, going through Mom’s and Carolyn’s clothes looking for just the right thing eventually ended up with me wearing a white blouse, a red and black plaid skirt and some kind of ladies shoes, in other words…the mistake of the century. Little knowing or even realizing the fall out this would bring, there I was, standing in the back of our house on the old lift-up wooden door that led to the cellar, fearlessly displaying my chosen finery as my parents’ camera clicked away, capturing the humiliating moment for posterity.

The dawn began to break when people who saw the picture started calling me Sister Pat.  Protest was futile.  I was done for.

Now that’s not the only time I played dress up, of course.   As the years passed I also dressed up as a cowboy with cowboy hat and strap on pistols, dashed around the neighborhood as Lash Larue or one of the Three Musketeers,  sometimes a World War II soldier, playing war games in the afternoons, and wearing other dress-up outfits which were in vogue “back in the day”.

I found out a very early age that dress-up is not so unusual after all. In all the years since that first ladies outfit I have continued to participate in the “Dress Up” game and have seen so many others play it too.


So many times the “Dress Up” seems to be an attempt to portray ourselves as something that is not really US!!!   Acting out a role that isn't ours to play.  Or, as my old friend used to say, to Be Somebody!!

Often more serious than dressing up as a cowboy or Superman,  it involves living beyond our means to impress others, perhaps with an expensive house or the most luxurious car or huge boat.    Others play up their own importance at their place of work or in social settings, sometimes arrogant, intimidating, hurtful to others. There are so many ways to dress-up but it never really hides the person underneath.


Now this certainly isn't an accusation, or my trying to be judgmental, just an observation from someone who has been tricked into the game and understood about “Dress Up” from an early age.  And, it doesn't go away easily!!!  Most of us still face the temptation to stretch our own importance, to impress, to love the applause, to go beyond what we have demonstrated in life, to Be Somebody.

Even Jesus was tempted by satanic thoughts… thoughts that came to him as he meditated in the mountains,  suggestions that he could rule the world, that he could turn rocks into bread, could throw himself off a cliff and live, if he accepted those temptations to Be Somebody!!.   (Matthew 4:3-10)   So, we are in good company when we are tempted this way.

Ironically, Jesus' idea of Being Somebody was to wash his disciples’ feet, to demonstrate humility, gentleness, love.   His example is there for us, an example that has stood the test of 2,000 years, and still is a bright light for our path.  No self importance, no fancy outfit, no need for material props.

One of my favorite reminders about “Dressing Up is in the second chapter of Genesis.  In the first chapter God had created the spiritual universe, and it was very good.  Perfect, complete.  The second chapter is an allegory of a material creation, where Adam and Eve were doing fine until they sinned, Dressed Up as disobeying God's request.  I have always felt so bad for Adam who, realizing that his Dress Up game was over, told God “I heard thy voice in the garden, and I was afraid, because I was naked; and I hid myself."
And God said, "Who told thee that thou wast naked?"    Adam was embarrassed, humiliated, his Dress Up cover was gone.  He had realized his error.

How often we find ourselves naked, cowering in embarrassment, seeming like the whole world has a camera to take that humiliating shot.  Or, just in the privacy of our own thoughts, we realize how dressing up has once again gotten us to the point of self examination, self doubt or self criticism.   All because we Dressed Up as something we aren't.

The Apostle Paul, who made an amazing transition from a role as a persecutor of Jesus followers to being a faithful follower himself, could see through the Dress Up game and longed to be clothed in immortal garments:
“For in this we groan, earnestly desiring to be clothed upon with our house which is from heaven:
If so be that being clothed we shall not be found naked."***

Mrs. Eddy knew that we didn’t need to wear a costume to look good when she said :  “Man is God's reflection, needing no cultivation, but ever beautiful and complete.” ****

Posted by Patrick Collins at 1:19 PM

Referring to the upright man, Mary Baker Eddy says in Miscellaneous Writings, "He assumes no borrowed appearance. He seeks no mask to cover him, for he acts no studied part; but he is indeed what he appears to be, — full of truth, candor, and humanity." Thanks Pat, for reminding me of this great truth.

Subtle elements: Download Spotify Premium Free for 30 Days how to get spotify premium