Lesson from the Leaves 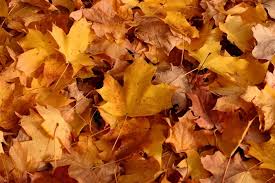 The soft, mellow music of Nat King Cole’s velvet voice  drifted softly across the front porch where I was sitting in my rocking chair, enjoying the view of the sun setting behind the Blue Ridge  mountains in a lovely late afternoon sky.
Click Here to listen... Autumn Leaves by King Cole 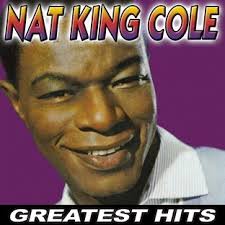 "The falling leaves drift by the window
The autumn leaves of red and gold ….”

The familiar words turned my thought back many years, to a time when the autumn leaves were falling, cascading down and covering the lawn on Jefferson Avenue in Chillicothe, Ohio, where a young boy had decided to help his Dad, a hard working father who was exhausted after an extra long night shift at the paper mill.

What had started out as a “Dad’s little helper” task was now turning into major disaster.  As a six year old, I had absolutely no idea that even well intentioned little “helpful tasks” could cause big problems.

It all started when I felt a little too big for my britches and decided to rake the fall leaves from the front yard.    I was so proud of myself for having raked the entire front yard, pulling the leaves with the big leaf rake out into the gutter.  Now that I had a huge pile about half the width of our lawn stacked high in the gutter and reaching out into the street, my last little task was to get rid of them.

Now it didn’t seem like a good idea to let my Dad know what I had planned, I wanted to surprise him with a “Well Dad, I took care of the leaves!” I could almost hear the inevitable praises… “What a good boy”.

I slipped into the house and got a box of matches and went back out. It took a few tries as I had never lit a match before, finally, success! I had a match burning and I threw it into those dry leaves.   I was on my way!! 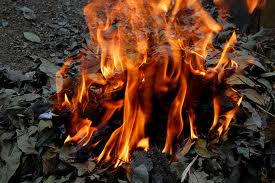 The fire actually grew faster than I had thought it would and the the flames started rising producing thick clouds of dirty white smoke.  In panic mode, I started raking vigorously covering up the flames,  need more leaves, raking faster and faster. “Surely if I get enough leaves on the fire it will be hidden.  Gotta cover it up quick!”


The fire just grew bigger and bigger, flames reaching higher and higher, smoke covering the neighborhood.  I was really frightened and wanted to keep my parents from seeing the fire. But…. 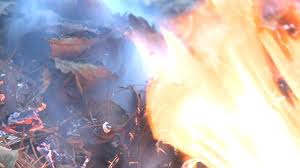 Above the sound of my racing heart I heard a shout behind me.  Dad was no longer sleeping and was standing with Mom on the porch aghast at the site and fearing, I’m sure, that the whole neighborhood would go up in flames. Dad rushed out with the hose and together we fought the fire until Dad told me to get lost, and get out of his way.  As I recall he wasn’t smiling his usual happy smile.

After the fire was out and things calmed down especially my Dad, we had what Dad called a little instructional talk.  What he lacked in tact, he made up for in straightforwardness!!   I guess the most important thing  I took away from the lesson was:

If you find yourself in a hole… STOP DIGGING! 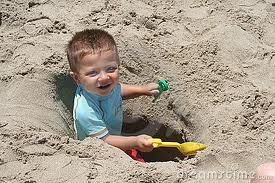 In what became “The Lesson of the Leaves” to me, I learned at a young age the consequences of a “cover-up” and the necessity for honesty and openness.  Tragically today we so often see the disastrous results of attempts to cover up mistakes, errors and omissions, dishonesty, situations that would bring dishonor, embarrassment, even jail time by individuals, businesses and governments.

How hard the lesson we all must learn that a problem approached with humility and honesty when there is  wrong doing, hastens a solution and makes things so much easier on everyone.   Even in very insignificant dealings, complete honesty and openness are so healthy.

It is fascinating to watch criminal defense attorneys being interviewed on TV, fiercely defending their clients, claiming their  innocence, maintaining that their client will be vindicated, notwithstanding that the defendant’s criminal act may have been captured on security cameras, in front of ten witnesses, leaving clear fingerprints and maybe had already confessed to the police!!   What a disservice to truth and honesty when people can blatantly tell something so obviously false.

I recently saw a sign in front of a local church that said, “Prepare your tax returns as though someone was looking over your shoulder.”   I wanted to jump out of the car and change that sign to read:  “Always do everything in the most honest and truthful manner and you won’t need anyone looking over your shoulder!!  A clean conscience is a wonderful feeling!!”  And I have earned the right to do that through painful experience, “Right Dad?”!!!

The weight of guilt is heavy. For those who are humble enough to learn from others, especially the wisdom of the ages captured in what I call my Operator’s Manual, the Holy Bible, we can see examples of the effects of deceit, dishonesty and covering up or hiding unacceptable behavior.  While there are many examples, one of my favorites can be found in the record of Jacob.

Jacob and Esau were twins, the sons of Isaac and Rebekah.
When the time came for Isaac to bestow his blessing on his sons, Jacob and his mother contrived to deceive Isaac into blessing Jacob in Esau’s place, thereby giving Jacob the inheritance that was due his brother, as first born. . When Esau found that his blessing had been given to Jacob, he threatened to kill his brother, and Jacob was forced to leave home to go to another country to avoid Esau’s wrath.

When he finally decided to come home he was very frightened and in a sacred moment, when he turned his whole life over to God and asked forgiveness, he was relieved of the guilt. As he approached his brother Esau, who was coming to meet him, they rejoiced in each other and were at peace. Poor Jacob must have been fearful and guilt ridden all these years because he had tried to hide his sin.

Religious pioneer Mary Baker Eddy counsels in her book, Science and Health with Key to the Scriptures, “Honesty is spiritual power. Dishonesty is human weakness, which forfeits divine help.   You uncover sin, not in order to injure, but in order to bless the corporeal man; and a right motive has its reward."   Proverbs has it: “He that covereth his sins shall not prosper but whoso confesseth and forsaketh them shall have mercy." 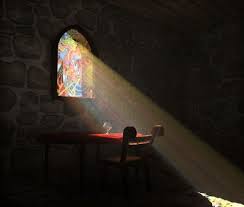 By opening the window shades and letting in the sunlight of truth we can put out the fire of guilt and enjoy a life of peace, honesty, purity, guiltless living.

As leaf raking time approaches,  I am remembering the Lesson of the Leaves!!  And as the sun sets over the mountains and the music changes to Nat Cole singing “How High the Moon”, it’s time to go inside….
Posted by Patrick Collins at 11:26 AM 3 comments: