THE HILL CLIMB - TALKING OR DOING! 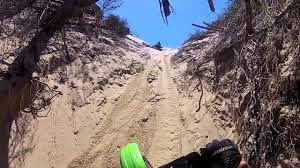 I sat there staring at the hill in front of me. The engine of the hill climbing dirt bike was sputtering as they are wont to do at very low idle speed. That hill straight ahead looked very steep, and… intimidating.   The churned up dirt track leading up the hill in what seemed like a near vertical climb was awaiting my hesitant self. Sure,  other bikes  ahead of me had made it to the top, maybe more experienced hill climbers,  undoubtedly less cautious, but most had made it to the top.

My dilemma had started a week earlier. As a Sunday school teacher working with a teen age class it seemed like every week I was the one learning lessons.   Not a bad thing, but not the way I had envisioned things when I volunteered to teach. As the class discussed the Bible Lesson for the week, we talked about fear.   One boy, about 16 years old, had shared with the class that he was going to do some hill climbs on his dirt bike. He told us of how it was a great bike and that he wanted to do it but that he had become fearful of climbing the steep hills.  He wondered if truly understanding  God’s love and protection the way that Jesus described Him could really help overcome fear?   Sure, Jesus urged us to “Be Not Afraid”, but how?

I of course took the cue, jumped in and assured him that he was safe in God’s care.  I thought sharing my own experiences would help and the whole class shared instances of how they had experienced God’s protection in their lives.

With all of my talk, encouraging him to trust and to be courageous, I had no idea that this young man would invite me to come the next week to enjoy the sport, to give him encouragement and to actually ride his cycle up that steep hill, an opportunity for me to  demonstrate strength,  courage and trust in God’s protection.  Oh Dear!!!  Now what had I done?

Now, I was a motorcycle rider myself but not really into off road riding. Here again, as my dad used to say, I had talked myself into a pickle.  It is easy to “talk the talk” as some folks say, to make claims, to maybe go beyond what we actually want to demonstrate!

So, sitting there, having gotten myself into this situation,  facing my challenge, I did reach out to the Father.   I was truly going to have to "Trust in the Lord" !    I asked for the silent voice to speak to me in thought and give me courage. And, He did.

The story of David and Goliath, a familiar one to many, and one that has special meaning to me, came immediately to thought.   The exciting story is told in the Bible in  I Samuel 17  where the  Philistines gathered together their armies to battle  King Saul and the men of Israel.     The Philistines had a champion, Goliath , of Gath.  He was a huge man and was suitably armed.  Rather than array all of the armies in another bloody battle,  Golaith proposed that  the Israelites  send forth one man to do battle to determine the contest.    Whichever one  lost, their armies would be the servants of the other nation.

The Israelites were afraid and only one, a young shepherd boy, David, had the courage to fight the giant.  While the Israelites were milling around in confusion, talking bravely perhaps but not willing to join the battle, David took the challenge.  To me this Goliath's very presence evoked fear and dread. 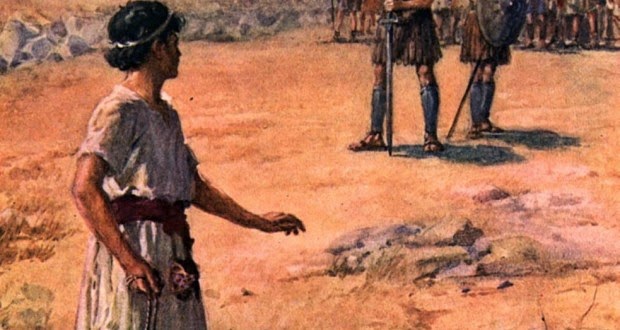 Young David was undeterred, his confidence in the power and presence of God to protect him undiminished.   He cried out to Goliath,  “ Thou comest to me with a sword, and with a spear, and with a shield: but I come to thee in the name of the Lord of hosts, the God of the armies of Israel, whom thou hast defied.”  Now THAT is Trust.  Not just talking, but demonstrating!

Needless to say this young lad defeated the giant, symbolizing the defeat of error, the striking down of fear, as David relied on God for strength, wisdom, understanding and courage.  Sort of David’s version of a hill climb. 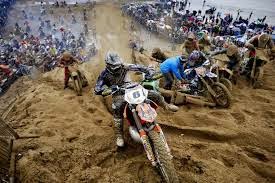 So, with the story of David’s courage in my thought, seeing the hill as my Goliath,  I grasped the bike’s hand grips, hit the throttle and went churning up that hill. At times when the bike seemed to waver and wallow, I opened the throttle even wider,  trusting that God would deliver me to the top. After all, my Sunday school class was counting on me!  What a wonderful feeling it was as I reached the top, exhilaration and a sense of victory over fear.  Doing instead of talking!!

Mary Baker Eddy, early American religious pioneer, Christian healer, preacher and teacher noted the importance of demonstration.     She said:
“While respecting all that is good in the Church or out of  it, one’s consecration to Christ is more on the ground of demonstration than of profession.   1.)  Practice not profession, understanding not belief, gain the ear and right hand of omnipotence.   2.)
Every day makes its demands upon us for higher proofs rather than professions of Christian power.  These proofs consist solely in the destruction of sin, sickness, and death by the power of Spirit, as Jesus destroyed them. This is an element of progress, and progress is the law of God, whose law demands of us only what we can certainly fulfil. 3.)

Jesus himself required proofs of God’s power. He knew that talk alone would not sway the world,    His overcoming sin, sickness of every type, death, lack, insanity, were all key to his acceptance by the world as the “son of God”, the example of the Christ.  Not words, but WORKS!

To confirm his conviction that the proofs were important, he said:  “ Believest thou not that I am in the Father, and the Father in me?   the words that I speak unto you I speak not of myself: but the Father that dwelleth in me, he doeth the works.

Believe me that I am in the Father, and the Father in me: or else believe me for the very works’ sake.   Verily, verily, I say unto you, He that believeth on me, the works that I do shall he do also; and greater works than these shall he do; because I go unto my Father.  4.)

We can trust God.  And we will not be afraid to replace talking with doing!! My student proved his own trust by joyfully making it up the hill too!  Several times!!

A favorite hymn gives us a gentle reminder of where we should put our trust:

O he who trusts in God’s protection
And hopes in Him when fears alarm,
Is sheltered by His loving-kindness,
Delivered by His mighty arm;
If ye God’s law can understand,
Ye have not builded on the sand.

O wait on Him with veneration,
Be silent in humility;
He leads you after His own counsel,
His will is done and still shall be;
All good for you His wisdom planned;
O trust in God and understand.