EARTHQUAKES AND OTHER SCARY STUFF 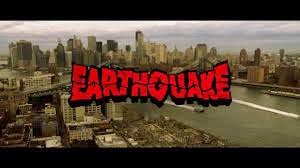 I could feel the floor starting to tremble under foot, first a jolt and then a gentle tremor. I saw my office door begin to swing slowly, then I realized...  Here we go again, still another earthquake.

I happened to be on an important telephone call at the time and as the senior manager in my building I knew I should set a good example and evacuate immediately but, even though the ceiling tiles were falling, books being jostled from the bookcase and there were sounds of screaming in the hallway, I stayed on the phone for the a couple of minutes to finish the conversation. The guy on the other end, one of my staff members, was laughing at my plight as he was safely in his office in Oklahoma, far from my Southern California location. The screaming continued, I left the office for safety outside.

When the dust settled and we received an “all clear” from Security, we all returned to the offices and I addressed the source of the screaming. I called my administrative assistant 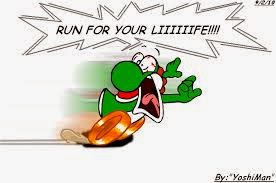 into my office. One of her duties was “Building Safety Coordinator. I told that I had seen her grab her “hard hat” and run out into the hall as the tremor started. That was good. But, we also discussed how that it was probably not appropriate for her, as the Building Safety Coordinator responsible for an orderly building evacuation, to run down the halls screaming “Run for you life! We’re all gonna die”!!!

I suggested that perhaps it would be better for her to give up that additional duty position and to accept another duty that was less stressful.

Now I personally know a lot about FEAR. I have sampled various fears many times in many of its disguises and know it intimately.

For example, Fear comes in many disguises. What is frightening to one may not be to another.

Fear is irrational. I have felt perfectly safe on a very bumpy flight, experiencing heavy turbulence, while the person next to me was reduced to crying and shaking. And, I have felt inexplicable fear in a packed elevator while others crammed in next to me laughed and talked, oblivious to what was frightening me, while I was about to implode.

If fear were rational, we would all fear the same things, which proves to me that FEAR is individual and within our own consciousness.

quoted as saying: “The only real prison is fear, and the only real freedom is freedom from fear.”   Intellectually, we know that it is important to stay calm, and we should exercise caution. Author Neale Donald Walsch says:“Caution is what causes you to look both ways before crossing the street. Fear is what keeps you frozen on the curb forever.”

When FEAR lifts its ugly head, we all react differently. Fear and confusion often block intelligent actions, sometimes we seem to become immobile. A Flying Safety magazine article some years ago reported that the Landing Gear warning horn was so loud and insistent as his jet fighter aircraft approached the runway, creating fear and confusion in the pilot’s thinking, that ironically, he landed without lowering the landing gear.

Since fear is subjective, in our own thinking, I have often contemplated Job’s observation and its relevance to myself. In the Bible, in the Book of Job, we find:" For the thing which I greatly feared is come upon me, and that which I was afraid of is come unto me." *1

Is the fear, that "Gear Warning Horn" so loud and insistent,   “coming upon me” because I am entertaining it, giving it place, honoring its presence by believing it? If I didn’t fear, would the “thing” happen?

Now I am not saying that my Administrative Assistant caused the earthquake!! But her reaction certainly reflected a fear that was personal to her.   BUT, what causes fear? How can we conquer it?

It seems that FEAR is a feeling that somehow we have become separated from our Creator, that we are alone without support. We may we feel that we are adrift in this world, vulnerable to something that is about to happen, or may happen, or will happen!! We feel a lack of firm foundation, and we ACCEPT those fearful, threatening thoughts and cling to them!

But do we have to believe everything that comes into our thought, everything we see, hear and feel? Are we “authorized” to sort the thoughts that come to us, do we have permission to keep the good ones, discard the bad ones, the fearful ones?

In her book, Rudimental Divine Science, Mary Baker Eddy cautions that : “Accepting the verdict of these material senses, we should believe man and the universe to be the football of chance and sinking into oblivion'.”*2   In her Bible companion book*, Science and Health with Key to the Scriptures, she challenges us, when threatened by belief of disease or any erroneous belief, to guard the door of our thought: She counsels: " Reverse the case. Stand porter at the door of thought. Admitting only such conclusions as you wish realized in bodily results, you will control yourself harmoniously." *3

God’s plan for us is never frightening, never leading to danger, doubt, discouragement, disease. We are never separate from our divine Source, never out of the Mind that holds us in His consciousness never threatened by God, who is LOVE.

Jesus of Nazareth, the humble preacher centuries ago, knowing that he was ALWAYS hand in hand with his heavenly Father, faced every situation fearlessly. He said, “I and my Father are ONE.”*4   And the apostle Paul comforted us by assuring us of our inseparability from God when he said:   “In Him, we live, and move and have our being.” *5   Definitely a statement of our true, spiritual existence.

Regardless of how solid, or shaky, material foundations may seem, they are really not “the rock” that we need as 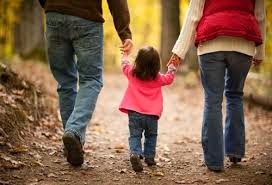 security. The assurance and peace of mind of being “at one with the Father” comes to us in a way that some of us have experienced as children when, unexpectedly separated from a parent and experiencing that sinking feeling, looked desperately for their comforting presence. Then, reunited, hand in hand with our parents, we once again felt safe and secure. That same comforting presence of our heavenly Father/Mother is always available, here and now, and will bring that same sense of peace and well being.

I walk with Love along the way,
And O, it is a holy day;
No more I suffer cruel fear,
I feel God’s presence with me here;
The joy that none can take away
Is mine;  I walk with Love today.