Lately I have heard so much about the Special Olympics and how so many people are overcoming physical disabilities and performing well beyond all expectations. 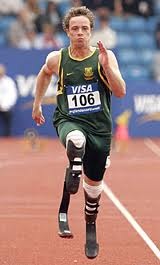 I am reminded me of an experience I had some years ago.


I had applied for a new position with a well known company.   When I spoke with the senior management individual in charge of the Information Technology services, he asked if I could fly to South Carolina to meet with him for an interview.   He had planned to be at the company’s  South Carolina location early the following week and thought it would be a good idea to meet there on Monday morning.


We worked out the arrangements for meeting and spent some time discussing how we would join up. He suggested I stay at a certain hotel and that we meet in the morning for breakfast.    When I asked how I would recognize him, he thought for a moment and then said that he would be wearing brown slacks, a yellow shirt and he would be carrying a clipboard.  We were to meet in the hotel lobby  at eight o'clock in the morning.

At the appointed time I kept looking for someone with a yellow shirt and brown pants carrying a clipboard and finally I saw him. He indeed was carrying a clipboard had brown pants and a yellow shirt and he had only one arm. I was pretty surprised to tell the truth.  As I realized that this gentleman was the man I was supposed to meet, I wondered why he hadn't mentioned that he only had one arm, a pretty safe bet for identifying an individual.   He was the only one-armed guy in the lobby.

During the day we had an opportunity to discuss in depth the responsibilities of the position, how the company operated and the role that I would be expected to play.  There was also time for some small talk about ourselves. He told me that he had arrived in South Carolina on Saturday  as he had been invited to a weekend charity golf tournament sponsored by the Governor.   He had done very well and was very happy to end up high on the leaderboard.

As we talked, it struck me that he didn't seem to realize that he only had one arm. That's why he hadn't mentioned it when we were discussing our meeting arrangements. This incredible individual had achieved senior management status in a very large international company, was apparently a very good golfer, husband and father  and took no thought that he was what some people would call "handicapped".

In her book, Science and Health with Key to the Scriptures , Mary Baker Eddy tells of a similar situation and the effect of thinking on human situations.  She relates, “The effect of mortal mind on health and happiness is seen in this: If one turns away from the body with such absorbed interest as to forget it, the body experiences no pain.

Under the strong impulse of a desire to perform his part, a noted actor was accustomed night after night to go upon the stage and sustain his appointed task, walking about as actively as the youngest member of the company.

This old man was so lame that he hobbled every day to the theatre, and sat aching in his chair till his cue was spoken, — a signal which made him as oblivious of physical infirmity as if he had inhaled chloroform, though he was in the full possession of his so-called senses.” 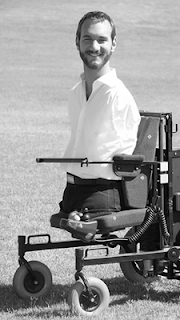 And then there is Nick Vujicic…. A limbless son was not what nurse Dushka Vujicic, and her husband Pastor Borris Vujicic had been expecting. How would their son live a normal happy life? What could he ever do or become when living with what the world would see as such a massive disability? Little did they know that this beautiful limbless baby would one day be someone who would inspire and motivate people from all walks of life, touching lives all over the world.   See Link http://www.attitudeisaltitude.com/aboutus-nick.php

Today is a good day to “put off the old man” as advised in The Bible, (Colossians 3:9)  to start looking away from limitations, lack and fear, and to emulate Nick Vujicic and  those Special Olympians who go forward every day overcoming seeming obstacles as they strive to reach their goals..  They defeat the  “I CAN’T thinking”  every day!!!

With God all things are possible.  God Bless You... and He has!

Posted by Patrick Collins at 8:09 AM

Very true, and inspiring! Another great blog from my favorite author, Patrick Collins!