Now Chillicothe, Ohio is not some backwoods, Johnny-Come-Lately town and as a matter of fact was the first capital of Ohio.    It lost that title mostly due to geography since it is in the lower part of the state and Columbus, the current state capital, is more in the middle the state and closer to the other major cities.
The name Chillicothe comes from the Shawnee word Chalahgawtha meaning “principal town", as it was a major settlement of that people.  The Shawnee and their ancestors inhabited the territory for thousands of years prior to the arrival of pilgrims in the country.

So it's not because we were small town with no history and no appreciation for culture that television was such a novelty in 1948-1949. It was probably just the most exciting thing to happen there since the Indian Mounds were built. 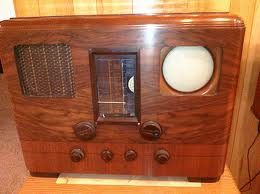 Now I had seen a television in the early days at my Aunt Mary's lovely house in Connecticut.  Her state-of-the-art TV had a screen just slightly larger than a coffee saucer and the picture was very fuzzy. Of course it was black-and-white and contained a lot of what they called “snow” which is a technical term for “you can’t really see much of a picture".  But it was so fascinating to me. 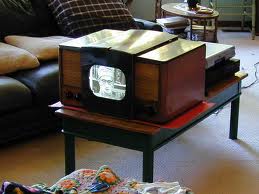 But residents of Chillicothe did eventually get television sets. Now, not everyone got a TV since they were pretty expensive and many people decided that it was rather too expensive for what you got. To receive a signal on television you had to have an antenna on your roof pointed towards the only stations that we could receive which were in Columbus and Cincinnati.    I guess it didn't matter if the programs were very good or not, we were just so excited to see this new communications medium. The most popular in the evening shows were John Cameron Swayze's news program and Milton Berle. 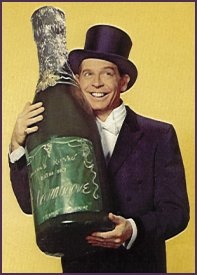 Milton Berle was very popular.  His autobiography notes that in Detroit, "an investigation took place when the water levels took a drastic drop in the reservoirs on Tuesday nights between 9 and 9:05PM.  It turned out that everyone waited until the end of the Texaco Star Theater before going to the bathroom".   He is credited for the huge spike in the sale of TV sets. After Berle's show began, set sales more than doubled, reaching two million in 1949. His stature as the medium's first superstar earned Berle the sobriquet "Mr. Television". 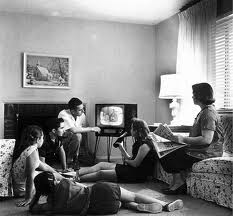 Now a wonderful thing, maybe a phenomenon happening only in small towns like Chillicothe, showed the graciousness and generosity of the citizens. We lived across the street from the Woolums family and they were one of the first families in our neighborhood to buy a television set. We were all very curious to see what it was about and they ever so kindly open their doors to the neighbors.  On many nights there were folding chairs set up in their living room and a small group of neighbors filed in to watch Milton Berle. Now is that generous or what?  Quite different from many neighborhoods today where the houses are buttoned up tight and neighbors hardly know each other.

Some folks brought popcorn with them and it was like being in a movie theater. I'm not sure that the neighbors appreciated just how generous the Woolums family was. 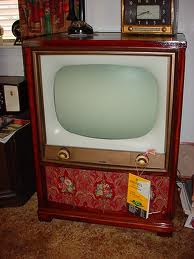 Our family finally got a TV in 1950.  It was a Sylvania Halolight that had fluorescent lighting around the screen.  The purpose was to make the picture clearer and sharper.  Or it may have been a cheap trick to sell more TVs.  In any case, we were excited to have our own set.

The power of television was proven to me by the effect it had on people.  While visiting my Grandmother and Grandpa one evening, as we sat in their living room watching their new TV,  I saw an amazing transformation. My elderly grandmother, the very picture of poise and decorum, turned into a raving fanatic in the middle of a TV wrestling match. The usually gentle, serene and loving lady erupted in screams of “hit him,  hit him, come on mister,  hit him… and hit him again”, all accompanied by shaking of fists and facial grimaces.   It was a scene much funnier than even the BEST Milton Berle show.  Gorgeous George or whoever it was did miraculously overcome his adversary and all eventually ended well. 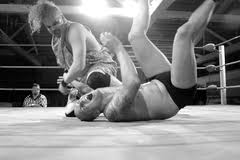 But I will never forget that scene.  And I came to an early understanding that the power and seeming reality of the television programs can have an absolute effect on the minds of the viewers, for better or worse.

And, at midnight, the National Anthem was played and the test pattern. 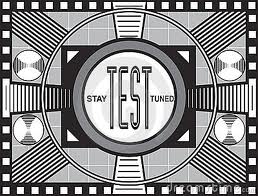 I love this article, Patrick! Which Grandmother are you talking about?

Thank you Dad. I remember when you bought our first color TV! :)

Hi! Grandma Pyle. She was Donnie's grandmother too. She and grandpa Pyle were wonderful and we went to their house for a lot of holidays. David, Donnie, Patty and Uncle Ed and Aunt Bea would be there,, my family and sometimes the Cases family but they lived in New York and didn't get there as often. Also the McGees. It was really fun!

That's when I was in the kitchen cooking and you came running in to the kitchen bursting with excitement, at about 6 years of age, and said, "Daddy when two people fall in love, does the boy fall on the girl or the girl fall on the boy?" I ran into the living room shouting, "What are you WATCHING"? Silly Dad, it was a cartoon.