The Night of the Raccoon

Just when you think you're ready to settle down for a good night’s sleep it seems that something always comes up. In this case it has to do with the Doxy brothers, Lucky and Bo-Bo, our two little Dachshund troublemakers. There I was getting the house settled down for the night, having let the Doxy brothers out for one last roam around the yard when I heard sound of the dogs barking and howling, screeching whining and other unintelligible noises. I went to the door to try to entice them back in but they would have none of it. It was just turning dark and I could tell that they were in the backyard, just short of the woods, close to the duck pond that I had built when we raised ducks. 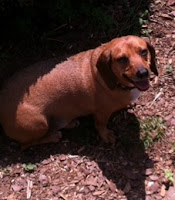 I decided to walk down into the yard, or run rather, to get them motivated to return but I quickly realized this was going to call for more extreme measures. They were absolutely having a fit and I was concerned about going further without knowing what was going on.

So Daddy, being the good Doggie Daddy that he is, ran back into the house and found the high-powered flashlight and a pistol, my 38 police special.   Funny, me with a pistol,since I've never shot anything and never would.  But I do use the pistol once in a while, shooting into the air to get the dogs to come inside. They seem to shy away from gunfire and after one round is discharged they are usually at the door trying to squeeze through the screen or pressed up against the wall like paint on a board.

By this time I had lost my sense of calm and found myself scrambling out the back door, flashlight and weapon in hand,  heart racing, charging off into the darkness.   And Yep, there they were, standing at pond side, soaking wet, barking furiously while one sweet little innocent raccoon face showed just above the water line. He was up to his head in the pond and all I could see was his little paws treading water and wide open frightened eyes pleading to be saved.  My heart went out to the little guy.     Of course my stern command to the dogs to go inside was met by looks of incredulity and I could almost see the disdain and loss of faith in Daddy as Pack Leader written on their wet little snouts 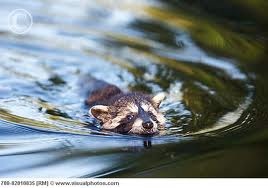 Then, presumably because the little raccoon could see things getting worse, going from having two dogs barking at him to having an oversized human glaring down with light and pistol, he decided to take his chances on escape and scrambled out of the duck pond and off in the woods. The two doxies, being undeterred by a mere raccoon and glares and shouts from Pack Leader took off in chase, followed by a large human form of excess avoirdupois stumbling awkwardly through the woods firing a pistol into the air.  At this point think of Laurel and Hardy!! 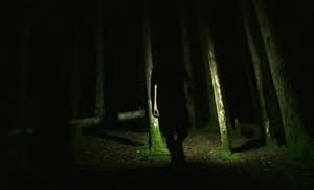 In the following few moments I learned several things.
First:  Raccoons and dachshunds are very short. They seemed oblivious to the tree limbs, the thorny vines and the numerous spider webs strung between the branches of trees on the non-path that I was following.
Second: Little dachshund and raccoon feet are pretty nimble and the roots of the trees don't hinder their progress, cause them to trip or even say things they are not proud of.
Third: How hilarious this scene this was with Daddy running through the woods, not knowing where the “pursuees”  were, running in pitch dark through fairly thick woods and realizing that I had not bothered to put on my shoes but was running in my sock feet and short pants.

Suddenly… SILENCE, that loudest of all troubling sounds.

With resignation, I turned around and started back for the house. It was rather disquieting with all dog and raccoon sounds silenced, the deep darkness of the woods and me with no idea about what had happened to my precious doggies nor the raccoon.    I was really worried.  To add to the confusion, as I reached the house I saw that a  car had pulled up our long driveway and was sitting at the top of the hill in front of our house, lights on but no one getting out. I thought, ‘That’s all I need right now.’   Maybe it was the police checking out reports of gunshots or maybe it was just a neighbor checking to see what was happening up at our little Hilltop Farm.

At this point I suddenly came to my senses and remembered a quotation from my favorite author Mary Baker Eddy who, in her book Science and Health with Key to the Scriptures noted, “Man is harmonious when governed by Soul."  Soul is one of the synonyms she uses to describe God.    That simple thought/prayer quieted me down and I began to turn to my trust in God that he was governing the situation.  After all I reasoned, if life is not appearing to be harmonious at this moment, I must not be experiencing God's government and letting God lead me.   I needed to get my Self  and my fears and concerns out of the way and let God do the "governing."   And it was a good time to remember one of my favorite quotes from the Bible that  "Perfect Love casts out fear." I John 4:18.   WHEW!!!!!

With that thought and a look back at what had just transpired I got a different perspective on the situation.  I am a person who finds something to laugh about in most situations, even when it isn’t necessarily sociably acceptable.   I started to laugh. What a picture it must've been if anyone had been watching the wild antics in the woods..

I was still laughing when I reached the front porch and as I climbed the steps I saw my two doxies standing by the door, looking at me, as if to say, “Daddy, why in the world were you running around in the woods at this time of night.  You should be in bed"!!   The strange car had departed and I was alone with my dogs. 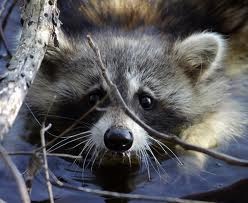 And so to bed, to thank God for His ever present Love and protection and to pray for the welfare of the precious  little raccoon, whose bright eyes and bandit mask are surely on another mission in our back woods.
Posted by Patrick Collins at 10:35 AM

May be one of my favorite stories ever... I can only imagine how that whole scene looked to whomever crept up your dark driveway... no wonder they turned around and left in a hurry.

I loved this blog entry and is a great reminder of perspective and who really is in control of all=) We fostered Lucky for several months and it is great to see he is happy as ever and part of such a wonderful family:)

Lucky is a love, not a mean bone in his body. Both Beau and Lucky are terrific. Lucky finally ended up in Vidor Texas after being shifted around in Savannah and Charleston I thik. He was listed on the Web and I found him. He had been in 7 homes in 14 months... and his name was Lucky!!!!! I decide to try to change his luck. Contacted AADR and adopted him. We drove 800 miles each way from North Georgia to Vidor TX and back. He was being cared for by a Foster in Vidor. He was worth every dang minute, mile and dollar. We love him dearly and he has blessed our life. Thanks for being there for him before he was sent to Texas. He must love you for all of your efforts.