AMOS & ANDY - and the BIG PRINT 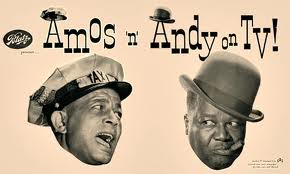 Years ago, watching television shows in the fledgling industry was such a treat.  We were blessed with such good programs,  clean, solid entertainment It seems that today even with hundreds of channels, the viewing selection is limited if you have had enough killing, crime and brutality just from watching the evening news.

In those earlier day I enjoyed shows such as Amos and Andy.  That program, a wonderful comedy series with such talented professionals,  was set in Harlem, New York and focused on the scheming, conniving, and plotting life of George (Kingfish) Stevens, who had a knack for looking for fast and easy ways to make money.    The other main characters included his Lodge brothers, Amos, a naïve but honest, hard-working family man, and Andy, a self-assured dreamer with somewhat overinflated self-confidence.

Stevens got his nickname, “Kingfish” from his position as leader of the Mystic Knights of the Sea Lodge.    Kingfish was always either trying to lure the other two into get-rich-quick schemes, especially the gullible Andy, or else tricking Andy into some kind of trouble.,  Other brothers included Algonquin J. Calhoun, the animated and colorful attorney-at-law who had his hands full defending – and sometime joining – the Kingfish’s antics and scores of fizzled schemes.

While many of the plots did contain, very obvious to even this young viewer, ingenious crooked or underhanded dealings, generally by the slick Kingfish, the viewer was able to see through the larceny, comedy and hilarious situations to the underlying lessons to be learned.   Kingfish and his schemes always backfired and what seemed like good, but somewhat devious ideas had their inevitable failure and humiliation for Kingfish.

Lessons learned through comedy have always seemed to stay with me longer than others because I have a tendency to remember funny things.   One example from that show, in a scene that has remained with me for years, Attorney Algonquin J. Calhoun was counseling Kingfish about a contract about to be signed.  He said, “Be careful of this contract Kingfish, they give it to you in the BIG PRINT and the small print takes it away.”

What a great warning!!  Isn’t that a STATEMENT OF FACT, a perfect description of the illusory nature of mortal, material existence?     How life tries to fool us into believing the “something for nothing” lie, falling for the deceiving belief of happiness in material things, money, status, lottery, fame, wealth, self-indulgence. 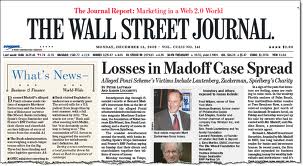 Recent stories of lottery winners, competitive bicyclists, baseball stars, concert artists, Hollywood personalities, financial kingpins and even government officials, whose popularity was heralded in the BIG PRINT of the media, accounts of exceptional accomplishment and victory, have fallen to the small print section of financial ruin, humiliation and personal shame.

And... who among us has not been fooled by BIG PRINT thinking and acting in our own lives?

My old guidebook, the Bible, has given some examples that prove the BIG PRINT-small print story is not a new phenomenon.   I suspect the aforementioned Algonquin J. Calhoun was a Bible reader himself, based on the sound advice he gave to Kingfish.

In one instance, Jesus related to his disciples the story of a young man, called ever after “The Prodigal Son”, who was so tempted by the Big Print, the thrill of life far away from home, the allure of distant places, seeking his own riches, that he took his portion of his inheritance and  left home and family.   He soon discovered that all of those Big Print items didn’t pan out.  He ended up spending all of his fortune, only to end up working hard in the grain fields and eating with the hogs, trying to find enough to eat.  He finally gave up that life and returned home to the welcoming arms of his father when he realized that he had been better off at home where even the servants had plenty to eat.

In this simple analogy, Jesus was pointing out the parallel of leaving the security of God’s guidance, comfort and care, and striking out for parts unknown, the allure of sensuality, affairs, dishonesty, immoral living, the plethora of things that promise but don’t deliver.

As a perfect example of a perfect example, Jesus himself wasn’t fooled by the BIG PRINT promises.  When tempting thoughts came to him when he was alone in the wilderness praying, thoughts characterized as coming from the (D)evil, that evil influence that comes to our thought, suggestions that he could fling himself unhurt from the top of the temple, turn stones into bread to feed himself, or even inherit all of the world and its riches, if only Jesus would bow down to evil, as if the Devil really could deliver anything!!!!   Jesus didn’t fall for the Big Print.  And the Devil, his BIG PRINT promises ignored and shunned, disappeared without a trace.  The lesson is that EVIL CAN’T deliver happiness, wealth, security or happiness.

That experience in the wilderness proved Jesus knew about the allure of the BIG PRINT and the resulting small print.     Speaking to a group of followers he said: Beware of false prophets, which come to you in sheep’s clothing, but inwardly they are ravening wolves.  *

When I hear of talented college athletes delaying big salary sports contracts to stay in college, instances of professionals leaving high pressure, high paying positions to take jobs which give them more time to enjoy the closeness of their children and family, fun jobs,  they have always wanted to do, it is encouraging.

More and more we see the wisdom of Mary Baker Eddy’s observation that:  “Beauty, wealth, or fame is incompetent to meet the demands of the affections, and should never weigh against the better claims of intellect, goodness, and virtue. Happiness is spiritual, born of Truth and Love. It is unselfish; therefore it cannot exist alone, but requires all mankind to share it.**

Trading the BIG PRINT allure for the simple pleasures that come through following God's leading, loving and forgiving each other,   with a selfless caring, provides full time employment!  Offer a smile and helping hand to someone today.   And be a small print person!!

Be sure to watch every day for more lessons like this one that we learned from Amos and Andy!!

*   Matthew 7
** Science and Health with Key to the Scriptures by Mary Baker Eddy  page 57
Posted by Patrick Collins at 2:25 PM

Thanks Pat. Good insights! I love how Mrs. Eddy explains it: "The Master's injunction is, that we pray in secret and let our lives attest our sincerity."