The Cadillac and the Optimist

: an inclination to put the most favorable construction upon actions and events or to anticipate the best possible outcome

The gleam in this elderly salesman’s eyes and the flash of his shark-like teeth as he hungrily appraised us revealed the heartless soul of a trained “closer”,  a man who would settle at nothing but a sale!!!

Used-car sales people are not overly subtle, but this man’s appetite for a big sale was undoubtedly whetted by the comment of this prospective customer saying he wanted… what? TWO Cadillacs??!!!   Optimism and confidence radiated from this sales professional.

Standing in the Used Car Lot of a Huntington Beach CA. Cadillac dealer, I wondered if I had made a terrible mistake by revealing my intent too early in the game.  Having just returned to the United States after a number of years in the Middle East, we needed two cars, something really nice in used, low mileage vehicles. 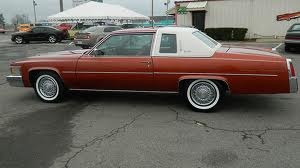 My wife, Gail,  found a nice older Coupe deVille with low mileage, a butterscotch color… nice but not too exciting.

That yellow two-door Coupe deVille hardtop with the brown leather interior, front and center on the car lot, had my name written all over it. I drooled over that car, the spotless paint job, its low mileage, obviously well-kept and probably driven by a little old schoolteacher who didn’t spend weekends as a NASCAR driver.

The scene shifts, some time later a new position opened up and we would be moving.  On our initial driving trip from the Los Angeles area to Houston for a house-hunting trip we decided to drive my baby, the Yellow Dream.  Even after two years the car was still my dream car and it was running like a top. 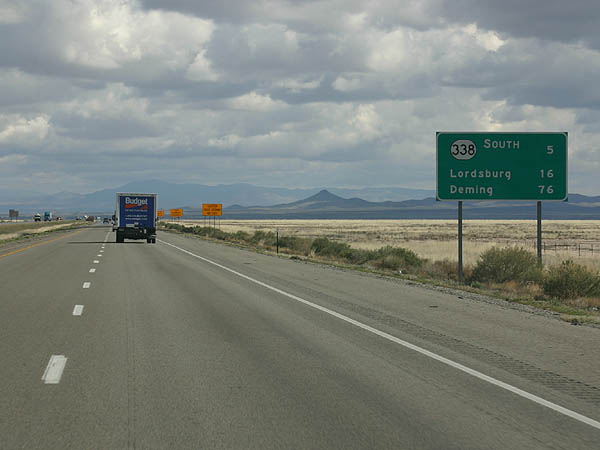 On our second day of the trip, as we approached a small town just after entering  New Mexico she started running funny, intermittent misfires, engine losing power momentarily and then catching back on.   The stretch of Interstate 10 through New Mexico is rather long and lonely and we decided to stop and have the car looked at.  It failed one last time, gave its last gasp as I drifted in to what looked like the only service station in town. Matter of fact it, looked like about the only thing in town other than a small motel and restaurant just down the street.

The taciturn service station attendant, known as Eugene, the only person present, offered that he was the “mechanic on duty”.  “What’s the problem?” he asked,  with a remote indifference.   After a brief description of what we were experiencing, Eugene, slowly got up, strolled over to get a 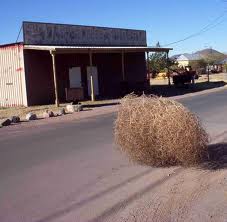 Eugene finally got up and popped the hood.  After some poking, spitting tobacco juice, more looking, more spitting, a little scratching of the head, Eugene pronounced that we needed some “parts”, which apparently could only come from some far distant place and would arrive “tomorrow” on the daily Greyhound bus.  He recommended that we get a room at the hotel just down the street.  As we slowly made our way to our overnight lodging, we were alone on the deserted street except for the tumbleweed, rolling swiftly ahead of the dry, dusty, desert wind, the scene reminiscent of an old western movie..   Ever the Optimist, I encouraged my wife to see the bright side, we were safe, not stranded on the road and there was a small bar and restaurant next to the hotel.  I was sure everything would work out just fine.

Glowing with a renewed sense of Optimism we freshened up and walked next door to the restaurant.  The entrance led directly into the Bar and in the dim light it was hard to see clearly, but we could make out the features of the two swarthy, Native American men, large western hats shading their unsmiling, sun ravaged faces, both turning to give us a blank stare, as if to say, “What are you doing in our town”?

We took seats a few stools away.   It was a very small place so we couldn’t get very far distant.  While Gail reached for the menu, I quickly refreshed my memory, going over one more time the recommended steps from the “Fight or Flight for Dummies” book I had read recently, just in case things went downhill.

One of the men slowly turned towards me and said, in a dull, unfriendly voice “What are you doing here”?  Summoning up my bravest command voice,  I replied, “Well our car broke down.  We won’t be here long.  We are driving to Houston, where I just got a new position at Brown and Root, an international engineering and construction company."  Well.... at that they both jumped off their stools and came over!   We became instant friends as we shook hands and they pounded me on the back.   In the Mother of All Coincidences, it turned out that they too were “Rooters”, a slang name for Brown & Root employees, and were temporarily assigned to this outpost working a project some miles south of town.  The tension broke, they hadn’t been mean thugs after all, and the fear and suspicion was in my own thinking!!  Optimism was renewed.   Now relaxed, Gail and I enjoyed a nice dinner.

The next day wasn’t good for Optimism.  Eugene had bad news.   The parts didn't make it onto the Greyhound and it would be still another day...  another night in the small motel, the one with the inadequate bed, inadequate shower and the 4" TV screen.

Greyhound came through, the necessary parts finally arrived, and Eugene "streaked" into action.  But, alas, the new parts didn’t fix the problem.  We don't know what Eugene did but it didn't work.  At this point a command decision was made to tow the car to Deming NM to an authorized Cadillac dealer.  The tow truck arrived and Gail and I took a very expensive taxi ride to Deming, since there were no car rentals in town.

Well, apparently due to the things that Eugene had done to the car, when the Deming mechanic tried to start the car it burst into flames.  Now more parts were required, a new wiring harness and more electrical system components had to be replaced.  Sure, these were additional  delays but I was Optimistic that the Dealer would be able to fix things.   At least the motel here was a step up.

Finally, on the road again, Houston bound, with everything fixed, Yellow Dream was running fine… for a while.  But then…    electrical system problems started cropping up… the electric windows weren’t operating properly, then radio quit working, turn signals… kaput.   As we pulled into El Paso Texas I saw a billboard for a Cadillac Dealer and decided to make a stop, no confidence in making it farther down the road.

As we pulled off the Interstate and drove into town Gail spotted the dealership.   As I turned to look,   I could almost see the sign, it wasn’t far, less than a block away, but somehow my vision was impaired… wonder where that smoke is coming from… NOOO!!  My beautiful car was  on fire... AGAIN.   Jumping out of the car as it came to a stop at the curb, my Optimism vanished.    My Yellow Dream was at an end.

We walked a half a city block to the Cadillac dealership and were met by a salesman as we walked onto the lot.  He had the same gleam in the eyes, same shark-like toothy smile, same Optimistic glow, apparently a standard uniform for salesmen of this particular brand of car.  Very humbly I said, “I need to buy a car”.  “Do you have a trade-in?” he asked politely. 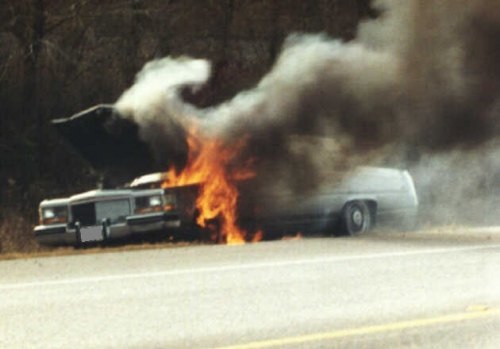 Pointing down the street I said, as Optimistically as possible, under the circumstances, “I do indeed. Do you see the car on fire down there?  That’s her.”  So... with minimal credit for a trade-in,  we bought another Cadillac.

But about Optimism.  A month or so later, I received a call from… Eugene.   He wondered when I was going to pay the $128 charge I owed him for destroying my car at his shop.

I took off my hat, bowed my head in respect… I was talking to a GENUINE OPTIMIST!!!
Posted by Patrick Collins at 8:56 AM

Email ThisBlogThis!Share to TwitterShare to FacebookShare to Pinterest
Labels: car repair, car trip, look on the bright side, optimism, optimistic

Pat, glad to see that that you're upholding Mary Baker Eddy's view of her followers: "Christian Scientists are a remarkably optimistic body of people..."

Are you still driving a Cadillac?

Wow, dad! I remember that story well from years of hearing it to.d and retold at holidays and special occasions. But I never laughed as hard, or enjoyed the story, and lesson, as much as I did reading your story. You are indeed a talented author, and very wise man! Keep them coming!!!! :-)