There have been times when I diligently prayed to hear and feel the reassurance of God's presence. It seems that most the time we don't see a large billboard showing God’s answer but if we watch carefully and listen closely, God gives little reminders of his presence and protection.

In the mid-1980s I was running a consulting company in the Middle East. We lived in Kuwait and had a residence in Oman and traveled among most of the Middle East countries in the Arabian Gulf area frequently.

At that time there were a number of airline hijackings and it was of great concern to those of us who traveled between Europe and the Middle East and within the Middle Eastern countries. On one occasion I was in London and preparing to return to Kuwait. During that time, several Middle East airliners were hijacked and there was a threat that terrorists intended to hijack multiple Kuwaiti airliners during one week.

I became very concerned and prayed for a better understanding that Divine Love alone governs man. My prayer was mainly focused on feeling a sense of God's protection for me and for all who traveled, and to know that Love alone is the motivating power of man. Also I prayed to know that evil can't tempt God's precious children to hate or hurt anyone.

The night before I was to fly back to Kuwait I prayed and thought deeply about the Bible citation in Psalms 139, and the Psalmist’s prayer for reassurance of God’s protection and his acknowledgement that God is everywhere present and always with us, when he said: “Whither shall I go from thy spirit? And whither shall I flee from thy presence? If I ascend up into heaven, thou art there, if I make my bed in hell, behold thou art there. If I take the wings of the morning and dwell in the uttermost parts of the sea; even there shall thy hand lead me and thy right hand shall hold me.” Those thoughts calmed me and bolstered my flagging confidence.

When I arrived at the airport the next morning, I must confess that I was still somewhat concerned, but then God gave me a “little reminder”. As I walked towards the boarding gate I looked out the window of the terminal and saw the front of the huge British Airways 747 that I was preparing to board. Painted on the side of the plane, just under the cockpit window was the plane’s name…. Wings of the Morning. I thanked the Father for the wonderful reassurance and sense of relief. I boarded the plane, feeling probably like the lame man described in Acts 3 in the Bible, that Peter and John healed at the gate of the temple, “that walked into the temple with them Walking and Leaping and Praising God”, all worry left behind. 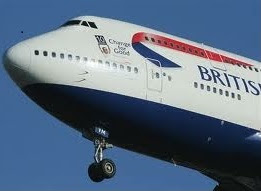 Posted by Patrick Collins at 6:56 AM