Now I’m not blaming anyone but myself. I should have known better than to trust an old Georgia farmer, George Brown.

George is a neighbor and dear friend. He lives just down the road from me and we have been friends and gardened together for several years. George has quite a bit of land along the river and I have two tractors.  A couple of years ago I  volunteered to do some bushhogging for him, clearing the weeds down in the field along the river.

Over time that progressed to the point where George invited me to garden in his field.  I think he felt sorry for me since my little vegetable garden plot is on the top of a ridge and all my rows either ran steeply uphill/downhill,  or from East to West with the tractor sliding downhill sideways as I plowed or cultivated. 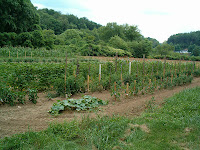 After telling me about a new kind of watermelon I should plant so that my melons wouldn’t roll downhill  (George is a funny guy!!!),  he suggested that “flatland farming” was much easier and invited me to join him on his land.

I was delighted.  The soil in his field is rich and fertile, a sharp contrast to my rock strewn clay, my North Georgia version of  “Rockytop”,  and there is good access to the river if it is necessary to irrigate in midsummer.  .

But back to "Wiley George" Brown.  Last Spring George asked me to lay off five or six 150 foot rows for potatoes.  Now having grown potatoes I know that it’s a lot of work. I reminded George that old Ed Vest down at the IGA grocery in town had some really nice potatoes, and buyin'  was much easier than diggin' and plantin', but he insisted. So I went into his  area of the field and laid off some rows for potatoes. Then I went about my business through the rest of summer, but did have occasional flashes of fear and dread  in my thought , wondering just how he planned to harvest the potatoes and what my involvement would be.

Well, when it came time to harvest potatoes George called me and asked if I had a turning blade plow for my Steiner tractor that we could use to turn up the hills of potatoes. I said I didn’t.  Then George, and this is where the “wiley” comes in,  had a flash of inspiration and told me that he had a “walk behind plow” once used to plow and cultivate behind a mule in days before tractors and other 20th century farm devices were available.  . He figured that if we could hook that plow up to my tractor and we could turn potatoes out of the rows. :::: sigh:::::

On the chosen day I drove old Steiney down to the field and we hooked up the plow with a chain.   Now George, in calendar years, is a little bit older than I am.  Granted, age is not much of a measure  of the man since I have seen grown men act like babies and young children display the wisdom of the ages. But being under the illusion of human age and its frailties I looked at George and said, "This is going to be too hard George, you drive the tractor and I’ll man the plow.”   George replied that he knew nothing about my tractor, didn’t particularly want to know about it  and assured me that he was perfectly capable of walking behind the plow.

So off we went, very slowly, very slowly, George walking down the newly turned earth rows, trying to keep from tripping, all the while holding the plow blade down into the soft earth  so that it would get under the potatoes and dig them out of the hills. I kept looking back thinking maybe I was going too fast, but George kept nodding approval of our progress and occasionally motioning to one side or the when I was getting a little off kilter.

Then disaster struck. At the end of the second row, in an incredibly timely move,  and an impressive demonstration of mental telepathy, George said his wife Louise had made a sandwich and it was now his lunchtime. I was just about to celebrate when Smokey Brooks, another neighbor and also good friend, showed up and said that he would fill-in while George was at lunch. My countenance fell, no rest for this weary guy.

I told Smokey how to do the plow and which rows needed to be done.  At this point he  was concerned that he had worn his good shoes and that he would prefer not to be on the plowing end, walking in the dirt.  In a most admirable display of good manners,  and knowing Smokey to be an honorable man, I didn't look down to see if he was telling the truth.

Soooo  I showed him how to operate the tractor.  Now keep in mind that this was all before I knew that Smokey’s nickname is "Pedal to the Metal Smokey",  later  confirmed by his wife Janice.   Apparently Smokey got his nickname from the fact that he drives full speed ahead wherever he goes.

In any event, as Smokey mastered the controls, I grabbed the hand plow and we started down the row, Smokey revving the tractor up to full RPMs and me hanging onto that woefully inadequate plow.

The Steiner tractor has eight wheels, can move mountains and she is fast.  I found myself running faster and faster to keep from being dragged helplessly.  Just keeping the blade in the ground was a trick since the plow kept jumping and skipping from one side of the row to the other and we were reaching the point where my feet were flying behind me like a cartoon picture.    I yelled:   “Smokey... SLOW DOWN!!!    Smokey  SLOW DOWN !!!”. This is the moment that I learned another fact about Smokey,  either he doesn’t hear well or he concentrates intently when he is driving a tractor!!

I’m not sure if we actually reached 35 miles an hour, or just how fast that tractor will go, but I’m sure we were maxed out.  When we made it to the end of the row some potatoes were turned up, some areas of the ground were not even touched by the plow, and I was exhausted, legs trembling and hands blistered.

Time for counseling.   “Smokey, we have to slow down this operation.”

Smokey nodded knowingly and we started off down the next row. Apparently, unknown to me, "Pedal to the Metal" is an incurable condition and we were soon back up to top speed,  hand plow bucking and dancing, sometimes on the surface of the ground…  sometimes not…me hanging on with my feet barely touching the ground as I tried to keep the plow blade sunk into the ground.

After an eternity we reached the end of the row and I called the whole thing to a halt. This is where God intervened and George showed up, took over the plow with me driving and Smokey switching to picking up the potatoes.  Once again we were back on a more acceptable pace.

I won’t elaborate on the amount of work it took after the tractor adventure was over, working on our  hands and knees picking up the potatoes and throwing them into piles, so that we could go back later to pick them up in buckets .

Of course George gave me some of the potatoes for my effort but we didn’t eat them all.  Even though they were delicious, I decided to keep a few on  the kitchen counter as a reminder of how wily Georgia farmers can get the best of innocent Ohio boys.
Posted by Patrick Collins at 1:59 PM