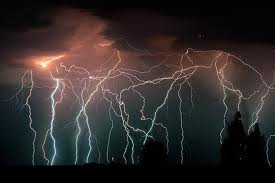 It was a dark and stormy night, rain was pelting down and my headlights could barely distinguish the form lying in the road, still and limp...

Well, that's the start of many a great novel and it was partly true recently, except that it wasn't really nighttime... but it was dim and very dark due to the heavy clouds and persistent  rain.

A single car proceeding cautiously along the deserted Aska Highway, following the river towards Blue Ridge, Georgia.  The occupants, Thais and Copper,  were a couple from south of Atlanta.  Their business at a local firm completed, and a long day behind them, they were making their way slowly along the dark roadway, returning to home and comfort.

The form in the road startled them to alertness,  they slowed down and finally pulled over to check it out.  There, in the pouring rain, a large dog lay quietly, not moving.

This  fellow had obviously been without food or care for some time.  And he wasn't too interested in moving from his chosen spot in the middle of the road despite the river of water running over and around him.  He had given up.

The couple decided that immediate action was needed and they were able to get him loaded into their car.   Now what to do?    Even though this wasn’t their familiar territory, they got the telephone number of the local Humane Society.   Upon hearing the nature of the problem, Humane Society volunteers immediately picked up the ball.  The couple was able to transport the dog, now named... yes... ASKA... to a meeting point, a local animal hospital. 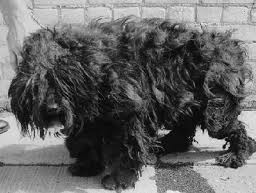 Aska was quite a sight.   At over 70 pounds, afraid, dirty, smelly and matted, he was a candidate for medical treatment and a good shampoo and hair cut.

The matting was so bad that he had a large piece of window screen embedded in his coat.    His ears were very sensitive and he didn't seem to be able to hear.   (Sometimes with a dog though, you aren't sure if they don't hear or are just ignoring you!!)

Humane Society volunteers got him checked in with a veterinarian for evaluation and appropriate treatment.  He did indeed have a very serious ear infection.  A total exam revealed that he also had heart worm.

Thanks to the selfless action of these visitors to our area, Aska was rescued,  received his legally required inoculations and all other appropriate treatment, including a great haircut and grooming, and was treated and released to the care of the Humane Society.  He was a sweet, loving dog and you could almost see and feel the gratitude he reflected for being rescued... "somebody DOES care".

Animal rescue groups face situations like this every week. Selfless volunteers working through rescue groups, or as individuals, who are present day “Good Samaritans”, see the tremendous need for love and “caring”.  Rescue efforts to save abandoned and abused animals are expensive and more importantly, require people who care enough to spend time helping.    There always seems to be a large supply of dogs and cats that need our help, the supply of Volunteers is not always so plentiful.

Now, back to the couple that rescued Aska.  Their hearts are large and even though they lived 100 miles away, they came back to check on their Aska and eventually adopted  him to give him a loving home.

The Bible story of the Good Samaritan reflects the kind of loving heart that doesn’t walk by on the other side of the road, or in cases like the Aska story, drive on by in the pelting rain, ignoring a fellow occupant of God’s universe in need of help and healing. Actions typified by the Good Samaritan's actions when he found an injured stranger are still being carried out by loving hearts.

"But a certain Samaritan, as he journeyed, came where he was: and when he saw him, he had compassion on him,   And went to him, and bound up his wounds, pouring in oil and wine, and set him on his own beast, and brought him to an inn, and took care of him."

"And on the morrow when he departed, he took out two pence, and gave them to the host, and said unto him, Take care of him; and whatsoever thou spendest more, when I come again, I will repay thee."   Luke 10:33.

If you have the heart of a “Samaritan”, or would like to find out if you do, you will experience a warm feeling and the joy of serving by volunteering with a local animal rescue group.   They would love to have your help.

Posted by Patrick Collins at 11:14 AM

very sweet... thanks for sharing. And a wonderful reminder that volunteering (with animal rescues or any number of organizations dedicated to giving to those in need) is a great activity to make time for. Many thanks to all those that spend their time helping others!!!

Thanks. The wonderful couple that found him are the type of people whose love overcomes human resistance to reaching out to help, even a helpless dog in the middle of a rain storm. Animal rescue people that I have met are perfect examples of the spirit of "The Samaritan.".

Anonymous said...
This comment has been removed by a blog administrator.
December 3, 2012 at 9:50 PM