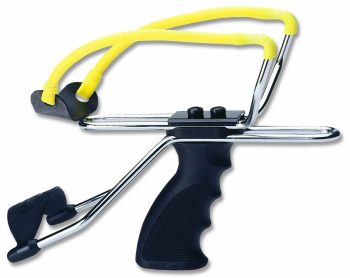 Now what is this? What could this possibly be, all wrapped up so nicely, but such a strange shape for a Christmas gift. It happened a couple of years ago. It was Christmas morning and I had received a gift from my son-in-law, Bob. Wonderful guy Bob but we can’t say that because some years ago he indicated he was tired of everyone saying “Bob is such a nice guy.” So we just call him Bob now. But what was this crazy thing? As the wrapping came off I could now see… a SLINGSHOT!!

What a unique gift. I loved it. I hadn’t had a slingshot since I was a really young guy. What memories flooded in, the scrounging around for an old inner tube, finding a small piece of leather, maybe the tongue of an old shoe, to hold the small stone or whatever ammunition we could find. Funny, but you don’t see many inner tubes any more since tubeless tires came in. How can the world even operate without old inner tubes, what can you make a really good slingshot of nowadays? We used to whittle down a small fork from a tree branch, cut the rubber strips from the tube to make the sling and fasten it all together. We were “armed”.

With a slingshot you could feel invulnerable, protected, safe and secure. Nobody is going to with fool with a guy that has a homemade slingshot.

Just recently, with all of the news of gun violence, reports of the killing of over 10,000 individuals by guns in the year 2012, day after day, incident after incident, and after a tragedy in Connecticut where 20 children and six adults were killed, ironically , inconceivably, thousands of people flocked to gun stores to buy even more weapons.
I began to think back to those seemingly better days. How a slingshot provided all of the armament and mental courage a young boy needed. What has happened to our world? There is constant talk in the media and even on the street of more gun control, better gun control, and also talk of No gun control, some think that everyone should be armed, that teachers should all have weapons… and of course, the old standard… “guns don’t kill people, people do.” My humble observation is that people without guns don’t kill nearly as many as do people with guns.

I have a solution and I am officially proposing it today. The solution is Slingshot Control… or, as it really should be called…FEAR CONTROL.   Guns should be outlawed and we should all have slingshots.


My solution, Slingshot Control, is soundly based on lessons from the Bible.  I have learned over the years that we can take advantage of what people have learned through the centuries as recorded in that wonderful book.

The lesson of significance here is the record in I Samuel of David and his encounter with a giant of a man representing the Philistine army. The Philistines who were forming for battle against the army of Israel and the army of Israel was terrified. Out of the Philistine army stepped the giant, Goliath of Gath, nine feet tall and an experience warrior. He challenged the Israeli army to a "one-on-one" battle to determine victory. He said,” Choose you a man for you, and let him come down to me. If he be able to fight with me, and to kill me, then will we be your servants: but if I prevail against him, and kill him, then shall ye be our servants, and serve us.”** 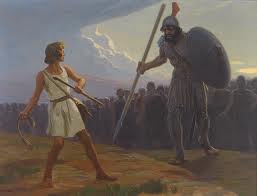 With the army of Israel frozen in fear and nobody stepping up to the plate, young David the Shepherd boy, armed only with a slingshot and some stones but with plenty of courage and a sense of God’s protecting presence, accepted the challenge. Goliath, the fearsome giant, equivalent to a “human assault rifle” by today’s standards, scoffed when he saw that he was being confronted by a young boy armed with only a slingshot and whose only battle experience included struggles with bears and lions. But undeterred, David, trusting in God’s power and the rightness of his cause said , “Thou comest to me with a sword, and with a spear, and with a shield: but I come to thee in the name of the Lord of hosts, the God of the armies of Israel, whom thou hast defied. And all this assembly shall know that the Lord saveth not with sword and spear: for the battle is the Lord’s, and he will give you into our hands.”**

Now that’s all well and good but is it relevant to today’s problems? We realize that most Americans that have a weapon or a license to carry a weapon are law-abiding responsible citizens, good people that believe that carrying a self-defense weapon is perfectly sane, a good idea, maybe even necessary. But don’t we each need to look deep within our hearts to reevaluate whether the sacrifice of our innocent citizens is worth the risk of having the whole country heavily armed.

Is it indeed time to consider whether our lives are so threatened that we have become a citizenry that lives in fear of guns and evil. What many consider to be the greatest nation in the world sets a bad precedent when we are not even close to the top of the “good country” list in terms of deaths caused by guns in peacetime.


In perspective, considering David’s victory over the forces of evil, it appears that maybe the size of our armaments should be inversely proportional to our faith in God, the God of love, peace, forgiveness, the God whom the Master Christian reflected so perfectly in his life. The bigger our faith and understanding of God as Life, the more constant our love and the smaller our "slingshots" need to be.

Despite some seriously troubling quotes from gun advocates, like “ The only thing that stops a bad guy with a gun is a good guy with a gun”, history has shown that love and trust in God are more powerful weapons than guns.

To quote the apostle Paul as recorded in II Corinthians, “For though we walk in the flesh, we do not war after the flesh: For the weapons of our warfare are not carnal, but mighty through God to the pulling down of strong holds; Casting down imaginations, and every high thing that exalteth itself against the knowledge of God, and bringing into captivity every thought to the obedience of Christ;

And religious pioneer Mary Baker Eddy : “Judas had the world’s weapons. Jesus had not one of them, and chose not the world’s means of defence. He opened not his mouth.” The great demonstrator of Truth and Love was silent before envy and hate. Peter would have smitten the enemies of his Master, but Jesus forbade him, thus rebuking resentment or animal courage. He said: “Put up thy sword.”

Thanks Pat for this humorous and timely post. I love Mary Baker Eddy's insights about our obligation with regard to control - but she refers to thought and not things. She says, "You must control evil thoughts in the first
instance, or they will control you in the second." Happy new year.

Interesting to hear your point of view. You ha e some valid points.