Ike and the Final Approach

Driving across Kansas is a wonderful experience, no matter the weather or time of year. We’ve made the trip from our North Georgia mountains home to Boulder Colorado a number of times and I always look forward to that leg of the trip, driving through Kansas. 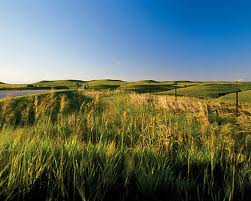 We always drive, not wanting to fly over this wonderful land thereby missing all of the breathtaking views, the interesting sites, and the people along the way. The long expanses of prairie and farmland, the majestic wind turbines turning slowly atop the higher ridges, the intriguing silos way off in the distance, eagles perched on posts along the highway, sometimes a large number of eagles congregating together like attendees at a convention, and to me a feeling, maybe strange to others, the comfort of the loneliness of the expanse, the feeling of God’s presence, seeing that faraway point on the horizon where earth meets sky, heaven meeting earth.

But one of my favorite stops along the road is Abilene, Kansas, the site of the Dwight Eisenhower Presidential Library and Museum. 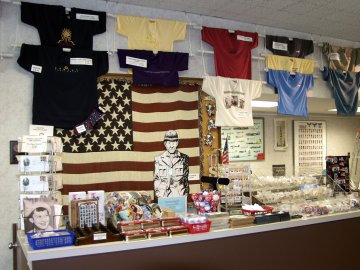 On a recent trip we included in our travel plans time to stop by and visit this wonderful facility. On this afternoon we pulled in to the parking lot and entered into the reception lobby of the museum.  There weren’t many visitors in the lobby area and we looked around at the items for sale, a typical museum venue with items of interest, trinkets, all the usual things..

I approached the ticket window and the lady told me the tickets to the museum were $9 each.   I was surprised since I felt like I was visiting an old friend and being asked to pay to get into the parlor.

As I took a step back and looked searchingly at the lady, my wife, a veteran of my talking to anyone and everyone, whether I know them or not, and having somewhat less of a forward (pushy) personality, took several cautious steps backward,  turned and fled to the safety of the postcard rack. Why, I was just beginning. I felt it was indeed necessary to let this lady know that while General Eisenhower was a boyhood hero, President Eisenhower was my Commander-in-Chief, someone who counted on me,  that I even had his life in my professional care at one time.   She gave me a quizzical, somewhat disinterested look but I continued, as is my habit.

Well, I told her the straight scoop, how on a blustery night in the middle of winter in the late 1950s, the President was flying to Europe for a meeting. I was then stationed at Harmon Air Force Base in Newfoundland, serving as an air traffic controller. During those times passenger aircraft were propeller driven and Newfoundland was a common stopover point for refueling on trips from the United States to Europe. We were very busy and the dicey weather kept air traffic controllers very busy.

On this particular night the conditions were pretty treacherous. There was a high wind blowing with  heavy snow, visibility was very limited and runways were snow-covered and slippery, braking action nil, not a great night, even for the occasional moose that wandered  out of the woods just off the runway.

We knew that Air Force One was on its way and we were watching the weather carefully.

Just past midnight, Colonel Draper, the pilot of the Columbine,  Ike’s plane, the Presidential Air Force One of that day, made contact with Harmon Approach Control.   On this night I was working as the Final Controller, that position in Ground Controlled Approach that "talks the pilot down" in inclement weather.  The controller picks up an aircraft on radar at about 10 miles out on final approach, then guides the plane, keeping it on the extended runway centerline and on the radar indicated "glide path", advising the pilot to increase or decrease the rate of descent or to correct left or right as we call off the mile markers. My voice might have been a little shaky,  feeling the weight of responsibility, talking down the President of the United States in this weather, as I spoke into the microphone, "Air Force One, Final Controller, how do you read me?"    Col. Draper was the best of the best and together we brought that Super Constellation in like it was on a wire!!

I was ecstatic when, after parking the Columbine, that beautiful big Super Constellation, just outside of our Radar Approach Control Center, Colonel Draper actually came in and thanked us for a great approach. I asked if the President was coming in and Col. Draper started laughing,  and maybe due to the relief of pressure after that "hairy" landing,  he could hardly stop laughing!!  He finally calmed down and  advised that the President was sleeping soundly aboard the aircraft and he would not be coming in to see me.  Me, the naive nineteen year old airman with the red face.

When things settled down it was nearly  2 o’clock in the morning,  the wind was howling, the blizzard was in full force and it was cold, and  I mean cold, I put on my parka and went outside.   The Columbine was parked there on the ramp, just outside the facility.   Of course the plane was surrounded by armed air police so I stood back a little way and looked up at the aircraft's windows where the President was probably sleeping.  I came to attention, saluted, and talking softly to myself thanked him for all that he had done for our country during the war, for his steadfast courage and selfless contribution, and also for his service as President of the United States. I told him I was proud to be under his command.   After my solemn salute I returned back to the warmth of the building.

Back at the Museum, as I finished my story, the lady behind the counter was looking at me with rapt attention, her mouth moving wordlessly, probably unconsciously.    I said quietly, "Ma'am, I just wanted you to know that I know quite a bit about President Eisenhower."

The lady looked at me respectfully, maybe brushing a tear from her eye… she said softly, “Sir, that’s all very interesting but the tickets will still be nine dollars each.”  My wife who, feeling the end of the story was near, had returned, whispered, “Nice going McGee!!!”   That’s my middle name and serves as a nickname when sarcasm is in order.

As we entered the museum it was eye-opening to see the memorabilia of Ike’s progress through his career leading to his eventual position as Supreme Allied Commander and then President of the United States. 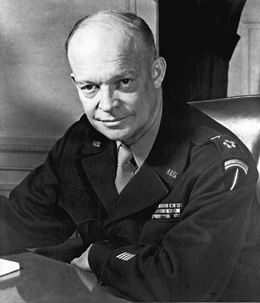 Ike was a great General, a brilliant tactician, and  he was a humble man, unassuming, an officer that a military man can look up to with respect.   One example of his integrity is how he took responsibility for his own actions, never blaming others.  On the eve of the crucial D-Day invasion which was to deliver the final blow to the war in Europe, a battle that was so crucial and yet could go either way, Ike wrote two statements.  Not knowing what would happen, but very concerned, he prepared one statement claiming victory and giving credit to his officers and the allied forces for all their work in bringing about the victory. The second statement, written in the event of the unthinkable, the defeat of the allied armies on these beaches at Normandy, placed all of the blame for defeat upon himself and his decisions.   Quite a contrast with some of the country's current leaders.

Today, as a nation experiencing violence that racks our society, killing children and other innocent victims across the country, and as a world power that is so involved around the globe with our military stationed in  174 countries, Dwight Eisenhower ‘s wisdom should be remembered and heeded.  This man who knew war, confronted the hatred, evil and mindless forces that slaughtered citizens of the world had a clearer view of the value of life.

This man, who reached the highest military and civilian positions of leadership in the United States,  conveyed his humility and peaceful nature in these words, which are engraved in the Place of Meditation at the Presidential Library site:   Every gun made, every warship launched, every rocket fired signifies, in the final sense, a theft from those who hunger and are not fed, those who are cold and are not clothed.  This is not a way of life at all… Under the cloud of threatening war, it is humanity hanging from a cross of iron”     Dwight David Eisenhower -  April 1953

Posted by Patrick Collins at 6:36 AM

Thanks, Patrick! Great story and great thoughts, well-said as usual. I appreciate the blog and you! Happy New Year!

Thanks Pat. Your column reminds me of this statement from 1st Timothy, "I exhort therefore, that, first of all, supplications, prayers, intercessions, and giving of thanks, be made for all men; For kings, and for all that are in authority; that we may lead a quiet and peaceable life in all godliness and honesty. For this is good and acceptable in the sight of God our Saviour; Who will have all men to be saved, and to come unto the knowledge of the truth.
Happy New Year to you and yours.

Thanks for another wonderful post. Love how you bring experiences to life for us, and find glimpses of Truth, as well as humor, in every day experiences. (not that talking President Eisenhower down on a blustery winter night in Newfoundland is an every day experience, mind you..) Happy New Year to you and your obviously patient wife !! :-)