Lesson from a Baby Brownie

I guess the days of the film camera are about gone.   I remember the neat camera Mom and Dad had in the mid 1940s, it looked complex, when you opened it up it looked like an accordion.  I wasn't allowed near it!!   When the Baby Brownie came out, a lot of kids got them for Christmas.  You could really feel important if you had the Baby Brownie. People would stop smile, pose, giggle and boys would almost invariably put two fingers behind their friend’s head to make the friend  look like he had horns.  Young boys are so clever!  Everyone wanted their picture taken. 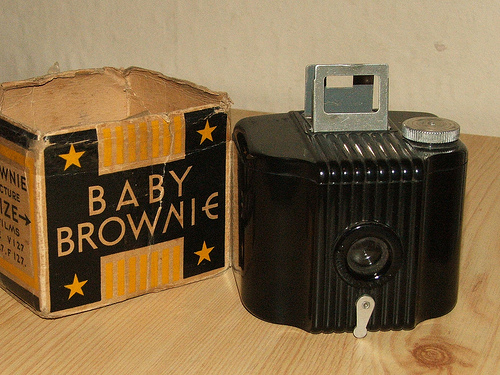 One of the problems was that you had to buy film. And that can get pretty expensive. And then sometimes you forgot to take the film out and open the camera later and wonder what in the world was on the film.  And, worse, not knowing if the film was blank or actually had pictures.   Matter of fact, I have had a roll of film on my desk, a  35mm in the little metal canister, for a very long time and I don’t know if it’s unused or exposed.  I have no idea when the pictures were taken, if any were taken.  I  sure hate to pay money to have blank film developed. So I guess it just stays on my desk.

With progress, and the "electronic age of all things miraculous", the film thing is nearly gone.  What a shame since the whole idea of film and developing pictures provides such lessons about life, about positive and negative, and developing the Positive From the Negative.   So many of us can benefit from that simple lesson, in our careers, our personal lives, with relationships and just being a productive, energetic, results oriented person.  And NO sales person should ever open that first prospect’s door without the "Lesson From a Camera".

With the film camera, when you take a picture, the image as light is transferred onto the film.   The film is then taken to a developing step where chemical solutions bathe the negative and it turns positive, producing a picture image that we can see.

Now if you have any experience with the “old” technology of film cameras, you will know that a negative is not of much practical use after you have made the positive.  Negative, by its very definition, means “ characterized by the absence rather than the presence of distinguishing features.”

The negative is very dark, the picture is not clear, you must hold the negative up to a very bright light just to see the picture in shadows.  All of the light images are dark.  For the negative to be of any practical use  whatsoever we have to turn it into a positive,  that clear picture that we can see, enjoy, put on our desk to show off our family.  And the film of thought works the same way.

As with the film, the “Negative” attitude in thought, in the human experience, is characterized by the absence rather than the presence of distinguishing features.  The shapes are fuzzy, unclear, no definition, dismal and dark.   Thought expresses denial, disagreement, or refusal.  Sometimes angry, maybe feeling disrespected, unloving or unloved, always doubting, shying away and maybe fearing the good, looking for the dark, and FINDING IT!!!!. 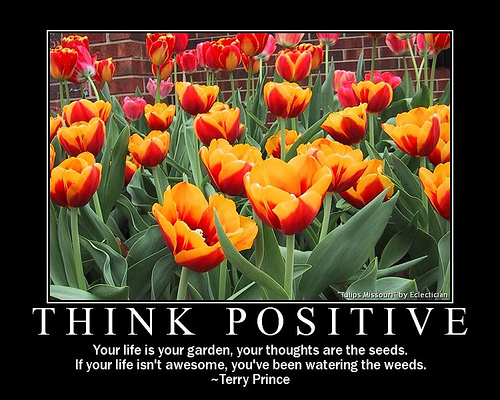 dictionary definition of Positive being “a good, affirmative, or constructive quality or attribute,   characterized by or displaying certainty, acceptance, or affirmation.”  Have you known someone, certainly not yourself, whose tendency was to embrace some negative traits… “The weather is going to be lousy today”;  I don’t feel well today and I am sure I will feel worse as the day goes on.”;  and, the favorite, “Well in this economy we can’t expect much to improve”?

In a lifetime career of sales and management I have learned how important it is to see the good, to expect the best, to see how the negative is a spoiler, a de-motivator, a route to failure, actually seeing bad where good exists.  Nobody wants to be around a Negative!

Perhaps we have seen athletes demonstrate the power of  “The Positive”.  So many times I have seen a sports team, apparently losing the game or match in the final minutes, rise to the strength of the Positive and come from behind to win.  In professional football there is even a term for The Positive. It is a Two Minute Drill.  That  is the mode the teams go into when they are behind or very close to losing the game.  The last two minutes turn into a Positive Blitz where the teams defy the negative and push towards victory.  Inspiring.

We’ve probably all heard the saying, “Seeing is believing”.  But even more true is “Believing is seeing”, for we “See what we believe as certainly as we believe what we see.”   We can MAKE IT HAPPEN.

In life we form our own experience in thought, so it is imperative to see through eyes filled with love, truth, intelligence, confidence.   When we expect bad things we often find them. When we look for and expect the good, it magically appears.

In the Bible, Job, having a horrible time, said:   “For the thing which I greatly feared is come upon me, and that which I was afraid of is come unto me.   Job 3.    Even when things look dark, our faithful persistence will soon discover a ray of light shining in the darkness, and it will light our  path.

A wonderful friend, bandleader Kay Kyser recorded a Hit Parade song by Johnny Mercer years ago that is a wonderful theme song.  In part is says:

So today, I invite you to join me while I ACCENTUATE the POSITIVE!!!

Posted by Patrick Collins at 9:29 AM

Thanks Pat - some great ideas. They remind me of Mary Baker Eddy's comment "The crude creations of mortal thought must finally give place to the glorious forms which we sometimes behold in the camera of divine Mind, when the mental picture is spiritual and eternal. Mortals must look beyond fading, finite forms, if they would gain the true sense of things."

Thanks Melissa!! That is so true. The fading, finite forms of negativity are gradually replaced in consciousness by the spiritual and eternal truths.

Being positive can be challenging at times....but it's necessary if you want to move forward. When I am feeling overwhelmed with negativity, I think of my favorite scripture, "Be still, and know that I am God." I feel this is God saying to me, "chill, I've got this". And indeed He does:) Thanks for more great insight!

You are right on! Thanks for that thought. I love it too. When the clamor of "self" is quieted we can hear God talking.

Some people might feel that accentuating the positive is just wishful thinking or human willing. The amazing discovery that Mary Baker Eddy made is that God is Mind and good and All. When we turn our thoughts to the positive we are actually focusing on what God is presently knowing and doing and we then experience the development of God's action in our lives.

Thanks Colin. So true! As Christian Scientists we learn the importance of seeing as God sees, knowing that evil, lack and failure are not "on the radar"!

Motivating a sales force and keeping those negative thoughts at bay has been a challenge but a wonderful opportunity to open the door to a more spiritual view for them over the years.

Thanks for your great thoughts!