Lessons from an Air Raid Warden

I really wanted one of those hats.  What a great hat. How important I would be if I had one, but Dad said  I am too young to be signed up as an Air Raid Warden.   I guess you have to be a Warden to have the hat. 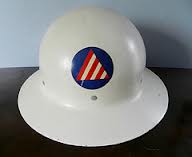 Sitting on the front porch swing, huddled up with my Dad and Sister, I could see him coming down the street.   It was almost dark but I could see his figure dimly through the dusk, looking at each house, peering carefully for any faint sign of light.

It was 1944 and an air raid drill was underway.

Midway through the Second World War, air raid drills and blackouts became common activities. In towns across the United States, Air Raid Wardens assumed leadership positions in educating their neighbors on drill procedures.   These volunteers, the lucky ones with the neat pith helmets, patrolled the streets, checking each house to make certain there was not a speck of light visible.  All street lights were turned off, window blinds were closed, no lights on, and certainly Dad would not be lighting a match for a smoke here on the front porch.

If a light was spotted in a neighboring house, unnoticed by the resident,  perhaps just  a small ray of light from a window, the warden was quick to correct the infraction.   "Put That Light Out” or "”Close Your Blinds” or  “Kill that Match”!!

As a small boy I didn’t even question how an enemy bomber could make it cross the United States from either the East or West Coast to bomb a small Ohio town.  Or… Why!   Was our paper mill a threat to the enemy?  Did the shoe factory, and fear of the consequences of  thousands of shoes being made, frighten them into a long range strike,  which was probably not even possible due to the distance from enemy territory?   Logic was not on the side of our being attacked but I bought into the whole idea of sitting close to Dad and wonderful Big Sister, wondering what was coming next.

How far away, how long ago those times were.   The fear, the hiding, the unknown, staying in the dark,  window blinds closed,  keeping our light from shining.  And how different is  the view that I now have.

In more recent years, my study of the Bible, and especially of the teachings of a humble spiritual guide, Jesus of Nazareth, over 2000 years ago, I have learned that our light SHOULD shine, it SHOULD be visible.   In fact, when our thoughts are spiritual, when our every thought and deed reflects  the  Love, intelligence, tenderness, kindness and wisdom that is ours as the “image and likeness of God”  we are the light of the world, and THAT is our defense.

In the Bible, that wonderful guidebook to life, Christ Jesus  counseled:    "Ye are the light of the world. A city that is set on an hill cannot be hid. Neither do men light a candle and put it under a bushel, but on a candlestick; and it giveth light unto all that are in the house."

He encouraged us to "Let your light shine before men, that they may see your good works and glorify  your Father which is in the heaven."   (Matthew 5)".

His words were so simple, so direct, so specific, words applicable to all Christians certainly, and I believe they apply to all …to  Jews and Muslims,  Buddhists and Hindus, all people…whatever their level of spirituality, whatever their religion or creed, whatever their light looks like, or high brightly it burns.   Each of God’s ideas, each one of His children,  has within him/her self the spark to light a candle for good, and let that light shine for all to see.

Harking back to those days on the front porch, I often ask myself,  Is the fear of attack, of worldly opinion, concern about being misunderstood or of being too forward or intrusive, keeping me from sharing the healing message that God has for us, keeping me  hiding on the porch, lights out, blinds drawn?   Or is my light shining in the darkness? 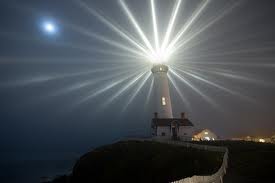