Flying over Europe at 30,000 feet I looked down at the countryside. I guess I was expecting to see little dotted lines separating the countries like we see on a map, down below is Germany, and there is Switzerland, over there, that must be France.    But it wasn't that way at all but it seemed like that would of been an appropriate thing to do   How do they keep it  straight themselves, without lines? 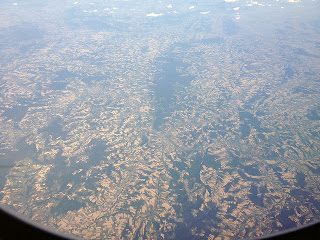 I took in all the sites and watched the landscape change as we made our way from London towards the desert of Kuwait, all the time fending off the flight attendant who wanted me to close my tiny little window blind on the million dollar view of the earth so people could watch a $2 movie about a talking dog!!   There was no question when we reached the desert. The landscape changed drastically and the sand went on for miles, and the movie was over so everyone was happy.  Talking dog… good grief!!. 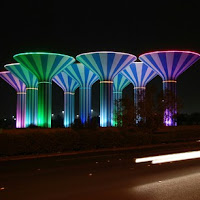 This was my first trip to Kuwait and the purpose was to discuss setting up a consulting company in the Middle East. I knew things here would be different but walking into the airport filled with people of so many different nationalities wearing different garb speaking different languages was quite an experience.  Here I am with briefcase, suitcase, don’t know one person and don’t speak Arabic, sounds like a recipe for success!  But they were glad to see me, a handsome young American with funny clothes. 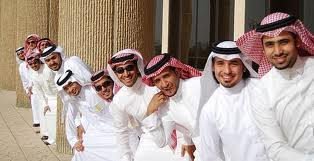 While my job was to partner with a Kuwait government company to bring information technology consulting services to organizations in Kuwait, I myself learned a lot about life and how folks in the Middle East have learned to live in the heat, and marveled at the timeless wisdom of these wonderful people.

I learned about hospitality and how simple kindness and friendliness can bring friendship even when there are language obstacles.   One day my Kuwaiti business partner invited me to his mother’s house for lunch. Now he was married and had his own house but he was going to his mother’s for lunch and a short visit.   As a “proper” American, I didn't want to show up unannounced and told him we should call and let her know that I was coming along.  He looked at me and, laughing, said, “No Pat.  Don’t worry.” 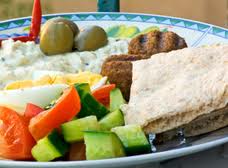 When I got there expecting to have a quiet lunch with him and his mother, I found that there were about 25 people there, mostly uninvited and unexpected I am sure, all milling around a bountiful serving table with lamb and fish, rice,  hummus, vegetables,  fresh salad, fruit and beverages. Everyone seemed to know each other but they weren't all relatives. My partner said, “ You've got a lot to learn. Arabs welcome everyone and when friends want to stop by and visit they stop by, even if it’s lunchtime or dinnertime.”

What an interesting time we had.  Listening to his elderly mother who graciously welcomed me and agreed to  describe what life was like in Kuwait in the early 1900s, sleeping on the roof since there was no air conditioning, walking everywhere  since there were no automobiles in those days, only camels, horses and donkeys, describing the food and how they lived… fascinating.

I had to be reminded which hand is used for eating.   Since we didn't have eating utensils and we were eating with our hands, you use your right, or “clean” hand. My plea of being a lefty fell on deaf ears and so I learned to be a “switch eater.”   Apparently every Arab is right-handed!!!

Most of the water used in Kuwait is produced by desalinization since the underground water is mostly brackish, meaning that it is not fit to drink.   Water is the brought to the homes by tanker trucks. Not too long before the time that I was in Kuwait during the mid-1980s, water was brought to the homes on the backs of horses, donkeys or camels... Each residence or office building has a huge water tank on top of the building.  Water is pumped up to the roof top tanks and gravity feed brings the water down into the building facilities. 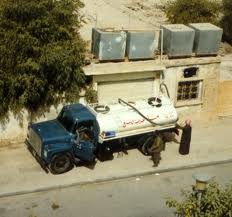 Now the water in the rooftop tanks becomes very hot.   When I first arrived in Kuwait and moved into my villa, naïve and innocent, I drew a glass of water to drink and it was very hot. Too hot to drink and too hot for ice to stand up to.  What to do???

Here’s where the “hot shot” American consultant learns a thing or two from his Arab brother.  I do have a hot water heater in the house, fed by the roof top water tank.  The water in that rooftop tank is already hot from the sun.   I learned to reverse the normal process that we’re used to by turning off the hot water heater and letting the hot water from the rooftop go to the water heater where  it slowly cools off to room temperature.   This is what you can use as “cold water”.  Are you confused yet?    Now, since the cold water faucet brings water directly from the roof, and this water is very hot, this is what we can use for showers, laundry and other hot water needs.  Simple when you know the trick and the system worked just fine, and saved energy.  Just do't get confused when you are in the shower!!!   In the winter we reversed the process since the sun, while still shining brightly is not nearly as hot and the problem is ameliorated.

Another lesson helped me understand a little more about how the Kuwaiti business persons think, sometimes so different from what I was accustomed to in the U.S.   My Kuwaiti partner and I made a formal proposal presentation to one of the government agencies and the management seemed very favorably impressed. They agreed to review the material and that we could discuss it later after their scrutiny. As we went back to our office I conferred with my partner and told him that I was excited that they really liked the proposal and that our prospects for getting the business were very good.   My partner said “No they didn't like it.”   I was shocked.  He said, “OK, here’s some Arab logic, if they liked it they would have said, ‘No we don’t like it’.  That would force us to negotiate and they could end up paying less.   Since they said they did like it, apparently that meant they didn't like it and they told us they did just so we would leave quietly and they could go back and drink tea in peace.  Who knew?   I am learning fast!!!

And so, mind in a whirl considering how at my age I could have been so naïve about so many things, I went home and went to bed.

One of the most touching experiences, and something I will never forget, was at a burial.  A relative of my partner had passed away and he asked me to go with him to the burial.  It was simple ceremony.  The men, family members and friends, gathering close to the grave while the women stood back in a group.  It was a gray day with the gentle wind blowing the sand, whistling softly, the quiet of the desert embracing our little group.  Since, to their view, everyone is the same in the hereafter, no big elaborate headstone was needed to proclaim a person’s importance.  The body was wrapped in a white cloth and gently laid into the grave, his head resting on a rock. A quiet, somber, ritual but I have never felt such a sense of God’s presence, an assurance of everything being right and good.  A sense of comforting peace embraced me.

So many things to learn.  So many differences in the culture.  So many wonderful people.

When I hear derogatory comments about Arabs, or Muslims, the fears and concerns about differences, the misunderstandings and the perceived threats by people that many Americans don’t understand,  I remember the love and kindness of those I met and worked with every day in the Middle East and recall the Bible verses:  .
“Have we not all one father? hath not one God created us? why do we deal treacherously every man against his brother, by profaning the covenant of our fathers?”    (Malachi 2:10)     And….

Posted by Patrick Collins at 1:13 PM

Thanks so much for sharing this rich experience. I often pray with those Bible quotes that ended the piece, realizing that it's that Oneness that's natural to us all, and the opposite we see so much of in the news is not the natural identity of anyone. This post is like a proof of that prayer. So glad you had this experience to share.